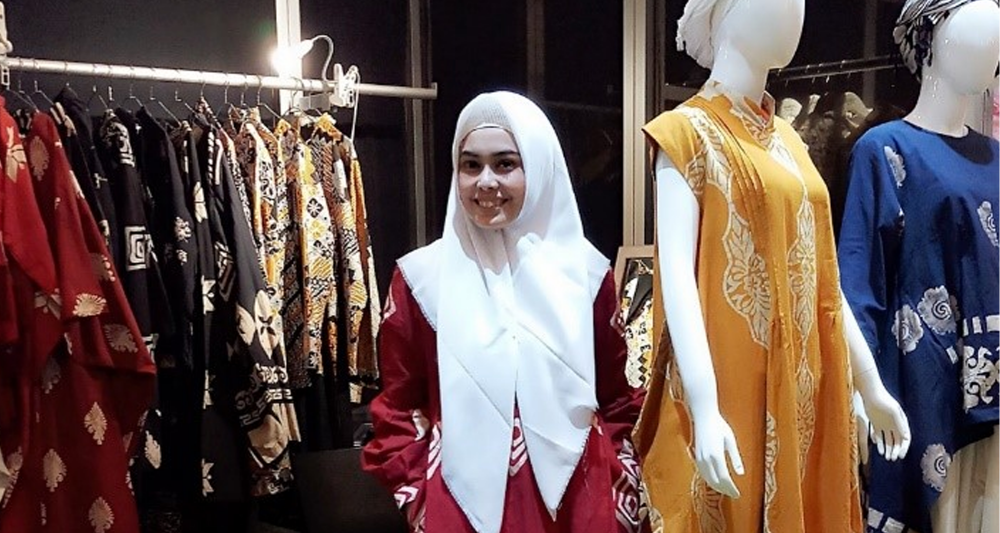 Hayati is a graduate of our Mentoring Women in Business programme, in collaboration with the Asia Pacific Foundation of Canada, who participated between November 2018 and November 2019. A year on from graduation, we spoke to Hayati and she told us her mentoring story.

Four years ago Hayati, a Woman Entrepreneur from Indonesia turned her passion into a business. Making traditional Batik clothes for women from start to finish is a lengthy process but one that she had the drive to succeed in. Despite having no formal business training, Hayati grew her business until in 2018, at which point, when her business two years old, she was nominated by the Asian Pacific Foundation in Indonesia to begin a year of mentoring on the Mentoring Women in Business Programme.

At this time Hayati’s business was surviving, but she felt that it could really move up a gear with the right support and guidance. Entering the programme with business expansion in mind, Hayati wanted to diversify into producing exciting new products, and learn to market and promote her current products more effectively. Leading her employees, Hayati hoped to work on her decision-making skills and her authority. She wanted to be more confident in delegation and in her financial skills.

A business planning professional from Canada, Nav was also nominated by our partners at the Asia Pacific Foundation of Canada. Nav felt that his own business journey was only possible because of his experience under the wing of dedicated mentors throughout his career. He knew what a good mentor could bring and how they could do it and felt compelled to share those qualities. Nav’s experience in business planning meant he was ready to offer his skills in sales, client acquisition, business growth product development, and leadership. The Mentoring Team saw immediate compatibility and made the match in November 2018.

Hayati entered the relationship aware that the Mentoring Programme guidelines required her to be the main driver of the relationship. She was excited and enthusiastic, but, she confessed, slightly fearful of an intimidating, teacher-like relationship.

Good mentoring relationships are an asset to both mentee and mentor, and both must approach with an equal trust and respect. Following the programme’s guidelines, Hayati found that as soon as she met Nav, her fears disappeared. In Nav she saw someone who reflected her own commitment, someone who was passionate about mentoring and getting the most out of the twelve months ahead. Following good practice, they spent their early time talking about their families, their interests, and developed a mutual trust from the start. Hayati said, “I was afraid of someone strict, instead I got a close personal connection… like a best friend!”

The relationship carried on in this friendly and close manner. Confronted by a very large time difference, the pair had to be willing to compromise and embrace flexibility in order to make the experience work around their busy schedules.

They developed a close rapport and openness, conducting much of the relationship on WhatsApp chat. They avoided strict rules but worked on an understanding of trust and respect. Video calls were held for two hours each month, but at a frequency that was convenient and relevant to particular issues arising for Hayati. Nav’s availability at short notice and his willingness to adapt was a great help. He was responsive and available when Hayati needed, and monitored their longer-term goals as necessary.

Throughout the year, Hayati and Nav were assisted by the Relationship Support team. On hand to ensure they were getting the most out of the relationship, regular check-ins ensured the pair felt comfortable and supported. Hayati also became a frequent attendee of the monthly webinars the Mentoring Team produce, and found them a useful additional perspective.

Effects of the Relationship on Hayati's Business

The Mentoring Programme encourages all pairs to create overarching goals for their year of mentoring. These goals need to reflect the aspirations of the mentee when entering the programme and must be malleable and adaptive to changing circumstances.

The pair had these goals in place within a month on the programme, and immediately began looking at achieving an increase in marketing efficacy. Together, they looked at optimising every opportunity and gaining as much as possible from each. With Nav’s support, Hayati felt more able to accept challenges, “When I got a chance for exhibitions I would just take it!” These exhibitions were Hayati’s primary way of showcasing her high-quality fabrics, but it was in talking to Nav that she felt able to think big, and started applying to international exhibitions. This leap of faith paid off and in 2019 Hayati exhibited her clothing in Cape Town, Shanghai, and Perth. She was also able to develop a digital marketing strategy which included launching a dedicated website for her business.

Following her plan to diversify, Hayati and Nav worked on a survey for her client base to determine which products were more successful, and what they felt was missing. This strategy increased client engagement and delivered a highly dependable result.

Towards the end of her time on the programme, Hayati secured a major opportunity, “For the first time in my life I had to present my business to investors… it was really big for me and I was so nervous at that time. Nav gave his support, guiding me to make a financial report and a business projection and I felt so much more confident.”

Hayati’s year on the programme left her with greater self-assurance. She grew her confidence in making key decisions and felt energised about the period ahead of her, “Nav and the programme broadened my mind.”

Graduating in November 2019, the last year has been far from what Hayati expected to experience. The onset of the pandemic at the beginning of the year posed a huge existential threat to her business. The exhibitions where her clothes would be showcased have all been cancelled, while lockdown in Indonesia meant demand for her clothes completely dried up.

But, still speaking to Nav outside of the programme, Hayati’s newly discovered resilience and persistence led her to adapt. In April she began production of personal protective equipment (PPE) to assist the efforts against the pandemic. Later in the year, her production became focused on facemasks, an essential item and one of the few in 2020 for which demand has increased. This willingness to adapt in part came from her relationship with Nav, “The Mentoring Programme set me up for 2020…I knew that whatever happened we had to do something to survive and be brave.”

Click here for more information on our Mentoring Women in Business programme. You can help empower over 100,000 more women like Hayati to create better futures for themselves, their families, their communities and the world by supporting our 100,000 Women Campaign.