When MSMEs have a stable base to operate from, including an established presence in their local market, sustainable funding, optimized business practises, and a strong online presence and digital business structure, they then have the capacity to expand to international markets. However, MSMEs may not have the knowledge or information on how to expand their market reach overseas. Moreover, MSMEs likely do not have the capital or networks to effectively expand abroad. 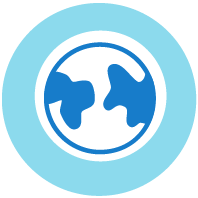 1. Lack of experience in international and regional markets

In order to have successful market expansion, entrepreneurs must first ideally gain some experience in international and regional markets. This experience would familiarize entrepreneurs with these new markets, and equip them with the skills and resources needed to expand their MSMEs’ consumer base, including the necessary networks and knowledge of exporting regulations.

There is a wealth of benefits from gaining international experience, with positive impacts not just for entrepreneurs and their businesses, but also for APEC governments and local business communities. 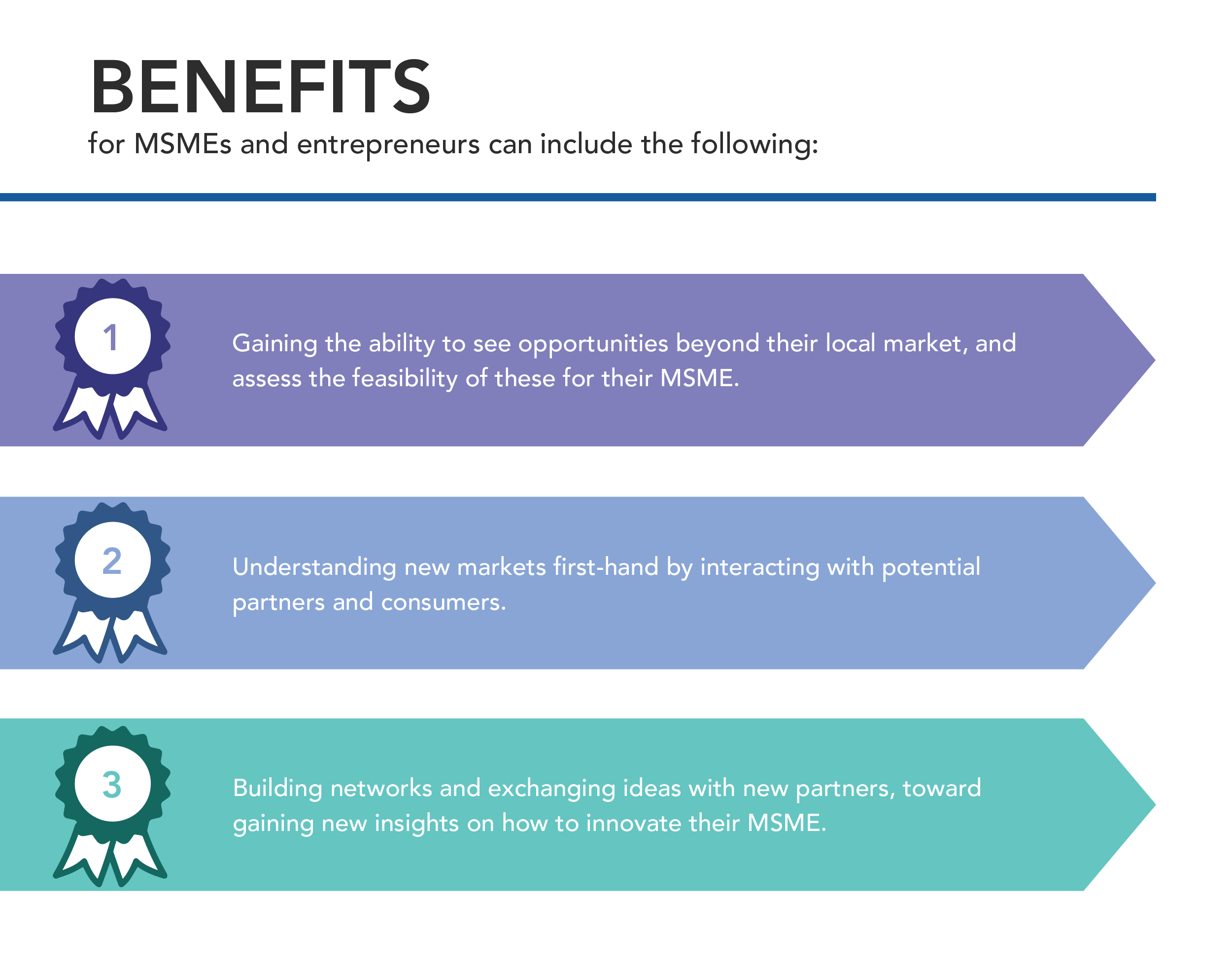 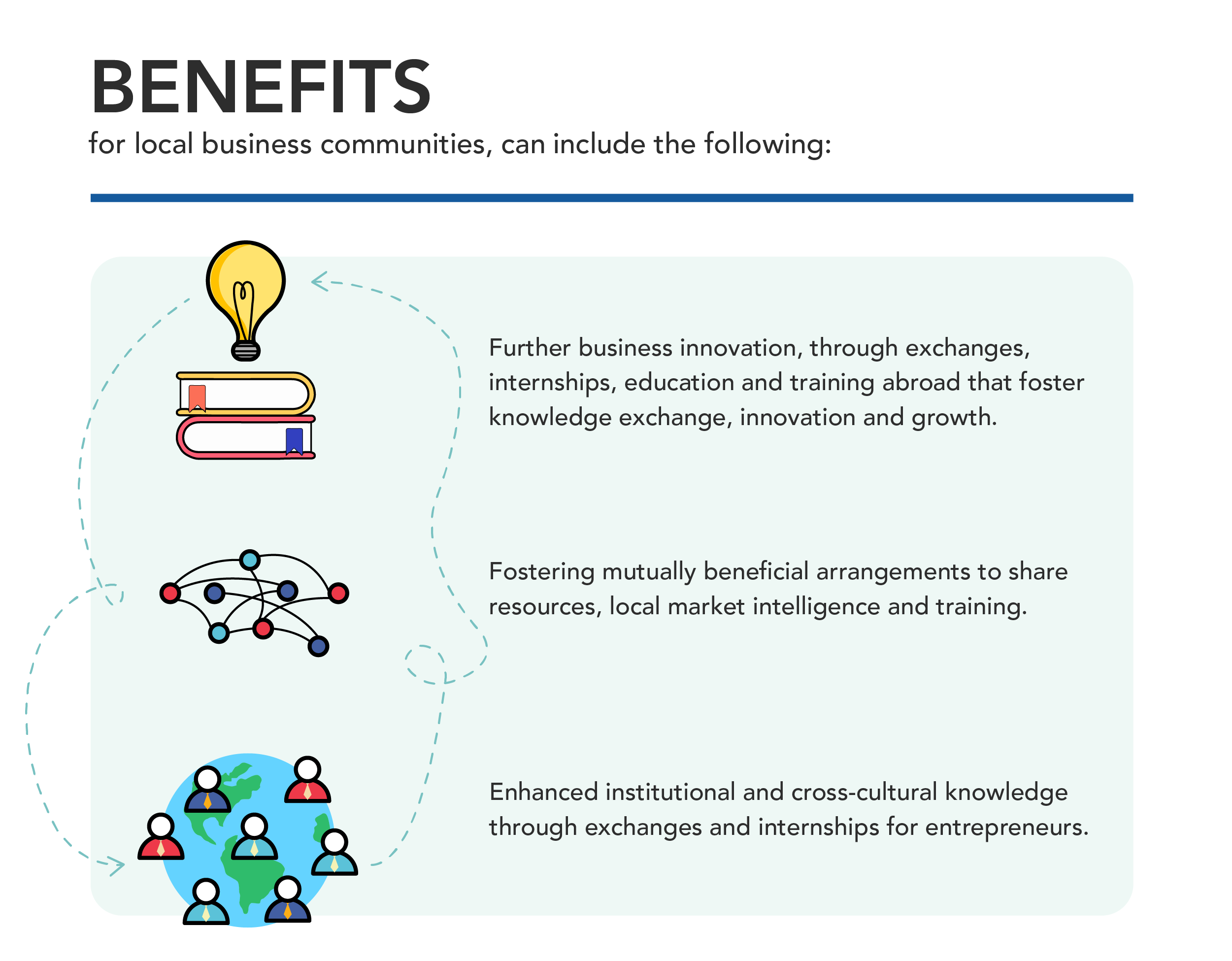 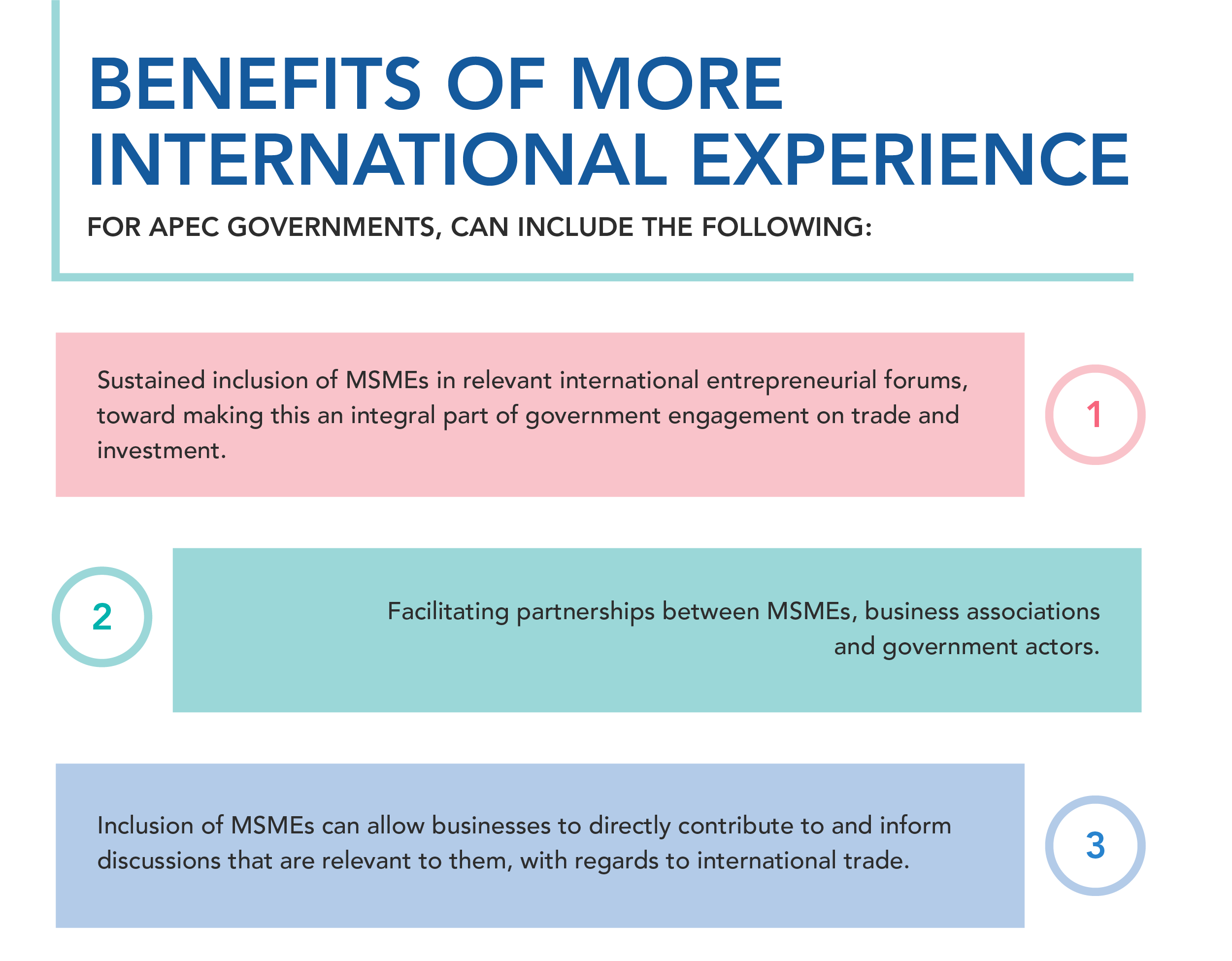 In the case of virtual outreach, given restrictions on travel during the pandemic, it is important access to internet and ICT technologies must be taken into consideration in relevant policies.

The lack of international experience thus fosters MSMEs’ lack of desire to expand into new markets. For example, the majority of respondents across the Partnership’s four economies said they had no plans for extending their businesses abroad and exporting.

It is vital that the benefits of gaining international experience are well communicated to MSMEs and to relevant stakeholders. Doing so will help encourage more MSMEs to expand their markets abroad, as well as spur on MSME innovation and growth with exposure to international markets and partners.

The Partnership recommends that government and business actors invest more resources not only in market expansion opportunities for MSMEs, but also for opportunities to gain international experience, such as through training and mentorship with businesses that have successfully expanded abroad.

2. Barriers to exporting and market expansion

On average, MSMEs account for less than 35 per cent of annual global exports. Due to their small size and typically local base, micro and small enterprises do not have the sufficient infrastructure or resources to engage in export.

Some of the main challenges for MSMEs in exporting include the following:

Our research on barriers to market expansion shows that the most pertinent challenge in expanding markets is business operation inadequacies, including factors such as business facilities and access to technologies.

The Partnership’s national survey in the Philippines also goes into greater detail about the barriers that entrepreneurs face in market access, as well as their knowledge of trade agreements and related programs to help them access international markets.

This survey data shows that the lack of funds is one of the most persistent barriers to exporting, reported by 44 per cent of respondents. The issue of financing is then followed closely by a lack of market knowledge (40 per cent).

The lack of capacity to export is also reflected in the lack of awareness of trade agreements, regulations and related programs for entrepreneurs. At least a third of Filipino respondents said they were unaware of the various trade agreements and blocs that they were asked about, including the Philippines’ Export Development Act of 1994, the ASEAN Free Trade Area, and APEC itself.

Similarly, in Indonesia and Peru, only a minority of respondents were aware of and used export promotion programs provided by their governments. In Indonesia, only one per cent of respondents used the smallholders export-oriented credit scheme. Meanwhile, in Peru, half of the survey population said they were unaware of the Peruvian government’s export promotion program.

One effective way to tackle the lack of interest, knowledge and capacity to export is MSMEs’ participation in an industry or business association. Our research on MSMEs’ membership in business associations in the Philippines suggests that there is a positive relationship between this membership and an MSME’s inclination to export.

Benefits of membership in these associations can include the following:

APEC Boracay Action Agenda to Globalize MSMEs: Action agenda to promote the internationalization of MSMEs and integrate them into global value chains by addressing barriers to trade and investment that affect them.

Overview of the SME Sector in the APEC Region: Key Issues on Market Access and Internationalization: Report from the APEC Policy Support Unit that analyzes policies which aim to increase MSME engagement in cross-border activities and business.

International Trade Centre (ITC) SME Competitiveness Outlook 2020: Report analyzing the impacts of the COVID-19 pandemic on small firms, international supply chain and trade, providing an action plan for businesses, policymakers and business support organizations to help small businesses through the pandemic and towards the future.