2017 Survey of Entrepreneurs and MSMEs in Vietnam: Building the Capacity of MSMEs Through Technology and Innovation

A national survey of entrepreneurs and micro, small and medium enterprises (MSMEs) in Vietnam to provide an analysis of business development in the region, and to better understand the opportunities and challenges faced by Vietnamese MSMEs and aspiring entrepreneurs around technology and innovation. 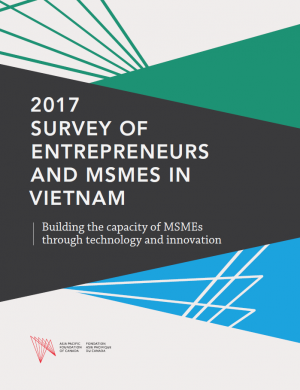 Highlights
1
Vietnamese entrepreneurs in MSMEs tend to be older (aged 35 and over), mostly male, highly educated, and with little professional or academic experience outside of Vietnam.
2
MSMEs founded by both younger entrepreneurs and female entrepreneurs are more likely to be innovative and use technology, be aware of impacts on environmental sustainability, and hire employees with post-secondary education and international experience.
3
Although not currently a high priority among MSMEs, efforts to improve environmental sustainability may also improve access to foreign markets, heighten innovation, and foster a group of youth and gender-balanced entrepreneurs.

Among the 21 member economies of the Asia-Pacific Economic Cooperation (APEC), MSMEs are the drivers of economic growth and innovation, making up over 97 per cent of total enterprises and employing over 50 per cent of the workforce across the region. In the case of Vietnam, MSMEs account for 40 per cent of gross domestic product (GDP) and employ 77 per cent of the labour force. As an emerging economy with an average 6.2 per cent projected GDP growth over the next five years, MSMEs are critical to Vietnam’s economic prosperity.

With the objective of analyzing Vietnam’s MSME business development process, this survey focuses on company profiles: their focus on sustainable development, their growth plans, the barriers to growth that they identified, and their use of technology and innovation. The survey also probed trends related to gender, age, and industry.

Conducted by The Evidence Network and Da Nang Institute for Socio-Economic Development, this is the first of four annual APEC economy-specific MSME survey projects commissioned by the Asia Pacific Foundation of Canada, in partnership with Global Affairs Canada, as part of the APEC-Canada Building Partnerships project.

“In an increasingly high-tech and fast-paced society, it is imperative that Vietnamese entrepreneurs and MSMEs be at the forefront of technological advancement and innovation.”

Download PDF
Next Article >
Micro, Small, and Medium Enterprises in Agri-Food: A Study of the Philippines, Vietnam and Peru