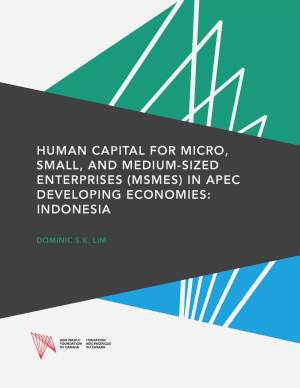 This report investigates the role of institutions in encouraging or discouraging highly educated individuals to engage in new business activities — which has been one of the key research questions in development economics in development economics (Baumol 1990; Dias and McDermott 2006). Emerging economies present a meaningful context to study the interactions between micro- and macro-level factors, considering the resource constraints and institutional barriers that many individuals in these countries need to overcome to start a new business (Bruton, Ahlstrom, and Obloj 2008; Kiss et al. 2012).

In particular, this report focuses on new business activities in one APEC developing economy: Indonesia. By comparing participation rates among highly educated individuals in new businesses in Indonesia with those of select APEC developing economies (Indonesia, Vietnam, Philippines, and Peru) and APEC developed economies (United States, Australia, Singapore, Japan, and Canada), this report highlights the roles that various institutions may play in individuals’ engagement in new business activity. Based on an analysis of 14 APEC economies included in the Global Entrepreneurship Monitor (GEM) dataset in 2014, a number of evidence-based policy and regulatory recommendations are provided.

First, including entrepreneurship education in the curriculum of primary, secondary and higher education institutions encourages highly educated individuals to engage in new business activities. Improving the school enrolment rate, along with focusing on offering entrepreneurship education early in the education system, can be particularly useful for increasing participation in new business activities across the population. Increasing support for new and growing businesses can be an effective policy lever to encourage highly educated individuals to create new business with innovative characteristics.

While the data indicates that Indonesia’s support for new and growing businesses is significantly stronger than the average of APEC developing economies, there is room for improvement when compared with APEC developed economies.

Download PDF
Next Article >
Fuelling High-Tech Startups: Building the Capacity of MSMEs through Technology and Innovation