The Role of Gender In Micro and Small Enterprise Business Development In Indonesia: A Firm-Level Analysis

In this study, we examine the role that gender plays in Indonesian micro and small enterprise (MSE) dynamics. The MSE business scene in Indonesia is characterized by a high degree of informality, often involving unpaid family workers and high percentages of other unpaid temporary workers. However, since MSEs are critical for lower-income groups to escape poverty, we acknowledge the important roles played by women who work in the MSE ecosystem in different capacities, such as business owners, employees, the family’s sole breadwinner, and an earner of income alongside other family members. 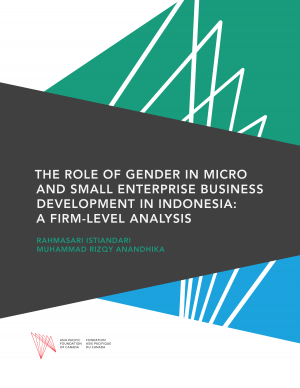 Descriptive analysis shows that female business owners are more prevalent in provinces farther from Indonesia’s business epicenter (Java Island), and that their businesses tend to concentrate in labour-intensive sectors such as textiles, food, and apparel. Enterprises led by women also employ a higher percentage of female workers. We found that highly educated women are often employees, rather than business owners, possibly indicating that Indonesia’s female labour force is risk averse when it comes to starting their own ventures.

Based on regression results, this paper illustrates that firms owned by women have lower productivity and profit margins and narrower marketing scopes compared to those owned by men. When it comes to workforce structure, however, we observe slightly different patterns. While a large number of employees in a firm is positively associated with broader marketing scope, it is negatively correlated with a firm’s productivity and profitability. Likewise, firms with a higher percentage of female workers have a broader marketing scope. The positive association between total workers in a firm – along with the percentage of female workers in a firm – and marketing scope fits with previous studies suggesting export-oriented sectors in developing countries are more labour intensive.

We also obtained interesting findings in regard to the financial profile of firms. We found that a higher level of self-financing correlates with a firm’s productivity measure but has the opposite effect on profitability and marketing scope. Firms receiving bank loans are more productive and have a broader marketing scope but are less profitable. Subsidized credit such as the Kredit Usaha Rakyat (KUR) program, however, appeared to have no significant effect on either the productivity, profitability, or marketing scope of a firm.

An underlying factor to these findings is the structural differences in the makeup of male-and female-led firms, which might disadvantage female-led enterprises. We find that women who head firms might be less interested in growing their business. Furthermore, while the average age of a firm does not differ widely across male and female-led firms, male-led firms have significantly more workers and a higher total of assets. Likewise, income earned by firms led by men is around four times higher than that of firms run by their female counterparts. This study finds that firms founded by female micro-entrepreneurs are necessity-driven as opposed to opportunity-driven ventures. While there are no statistics available to explain the underlying factors causing this result, these findings indicate their presence.

Acknowledging and understanding the differences between male and female entrepreneurs, especially among MSEs, is a necessary step for thinking about ways to help empower women entrepreneurs.